It’s the return of the NFL Top 5 Bottom 5. After two weeks it’s pretty clear there are two teams above the rest. And while both may stumble here and there during the season, if they can avoid major injuries, I wouldn’t be surprised if these two meet in the Super Bowl in San Francisco.

And as always we pay tribute to those heroes that give their all on the sidelines jumping and shaking those pom pom’s. The NFL cheerleaders of course!

TOP 5:
1. New England Patriots (2-0): The defending Super Bowl Champs show Rex Ryan that his Bills are far from ready to knock them off their perch at the top of the AFC East.

2. Green Bay Packers (2-0): The Packers are getting hit with injuries but as long as Aaron Rodgers remains healthy the Packers appear to be the best team in the NFC.

3. Arizona Cardinals (2-0): The defense is good. The offense has been solid as well. But the big question always looms…can Carson Palmer stay healthy?

4. Denver Broncos (2-0): The Donkey’s have scrapped their way to 2-0 despite the fact it takes 10 minutes for a ball to float from Peyton Manning to his receivers.

4. Detroit Lions (0-2): Lie-downs lose first two on the road. Returning home could help but easily could start 0-3 hosting the Broncos.

5. Philadelphia Eagles (0-2): Never thought the Iggles would be here but their poor early play definitely puts them on the list.

Here is this week’s 1320 KFAN’s Gunther and Graham’s NFL Top 5 Bottom 5. The Top 5 stayed stable with some shuffling in the Bottom 5 and a first time appearance by my awful New York Jets. We celebrate this list with NFL cheerleaders in costumes. You’re welcome and Happy Halloween!

2. BEARS (2): Bears are a shaky No. 2 needing a field goal as time expired to beat the Panthers at home.

3. TEXANS (3): Houston rolls off the bye week with what should be an easy win versus the Bills.

5. 49ERS (5): Alex Smith couldn’t have played any better in the win over Arizona.

BOTTOM 5:
1. JAGUARS (1): They lost again but at least they competed with the Packers for three quarters.

2. CHIEFS (2): KC commits four turnovers to a league leading 25 in the loss to the Raiders.

4. BROWNS (3): Cleveland wins a ugly one over the Chargers but the Browns will take whatever wins they can get.

5. JETS (NR): After being humiliated at home by the Dolphins it’s time for the Jets to give the ball to Tim Tebow and play for a better draft pick.

Here is this week’s 1320 KFAN’s Gunther and Graham’s NFL Top 5 Bottom 5. As always there was some shuffling but the No. 1’s stayed the same and in honor of the 49ers getting back into the Top 5 we give you you a “hair raising” photo of some of their cheerleaders!

1. FALCONS (Last Week-1): Atlanta comes off the bye remaining No. 1 but a tough test at Philadelphia coming up on Sunday.

2. BEARS (3): Jay Cutler actually shows toughness and the Bears defense continues to carry this team in the win over the Lions.

3. TEXANS (4): Houston returns to form after Packers loss with an impressive win over the Ravens.

4. GIANTS (5): Eli Manning continues to show that he can get it done in the clutch.

5. 49ERS (NR): Sporting the leagues best pass defense the Niners take down the Seahawks and look to take control of the division on Monday night against the Cardinals.

1. JAGUARS (1): An awful season only gets worse with the news Maurice Jones-Drew will be out for possibly an extended amount of time with a foot injury.

2. CHIEFS (2): Brady Quinn is now the starting quarterback. Like that is going to help this terrible team.

3. BROWNS (4): Another week, another loss. All hopes for this franchise turn to the new owner.

5. RAIDERS (3): Raiders win, Raiders win. Ok it was only against Jacksonville.

Here is this week’s 1320 KFAN’s Gunther and Graham’s NFL Top 5 Bottom 5. A new number one in both polls. To celebrate we give you a Tennessee Titans cheerleader in pink whose team dropped out of the Bottom 5.

TOP 5:
1. FALCONS (Last Week-2): Barely got past Oakland at home but as the only unbeaten team in the NFL they have earned the No. 1 ranking.

2. RAVENS (4): Deserve to be here but not sold they can stay with the season ending injuries to Ray Lewis and Lardarius Webb.

3. BEARS (5): Chicago rolls off a bye week into a Monday night showdown with the Lions.

4. TEXANS (1): Houston comes back to reality with a loss to the Packers but still in full control of the AFC South.

5. GIANTS (UR): The GMen returned to Super Bowl form with their dominant win over the 49ers.

BOTTOM 5:
1. JAGUARS (2): How bad are the Jaguars? They move into the bottom spot while being on a bye week.

2. CHIEFS (3): No matter who the quarterback is this team is awful.

3. RAIDERS (4): Give the Raiders credit for competing in Atlanta. Should beat Jacksonville Sunday.

4. BROWNS (1): Coming off their first win the Browns get a new owner and force Mike Holmgren into retirement.

5. PANTHERS (NR): Wonder if Cam Newton can snap out of his sophomore jinx season at home versus Dallas? Probably not.

As a New York Jets fan that is still sickened by the fact they traded for Tim Tebow in the first place I can say I will not be purchasing Madden ’13 after EA Sports released a screen shot of him “Tebowing”. If this made me ill I can only imagine how I will react when Tebow does it for real in the green and white uniform. Apparently the new Madden will include other player celebrations including the New York Giants Victor Cruz’s salsa dance. I think can safely say I will not be purchasing this year’s version of the game.

New York Giants quarterback Eli Manning hosted Saturday Night Live and by all accounts he did a solid job. The most talked about skit was Manning’s commercial for “Little Brothers” where he helped younger siblings exact revenge on their older brothers. The last line is classic. It’s not as good as his older brother Peyton Manning’s United Way skit but it’s pretty close. 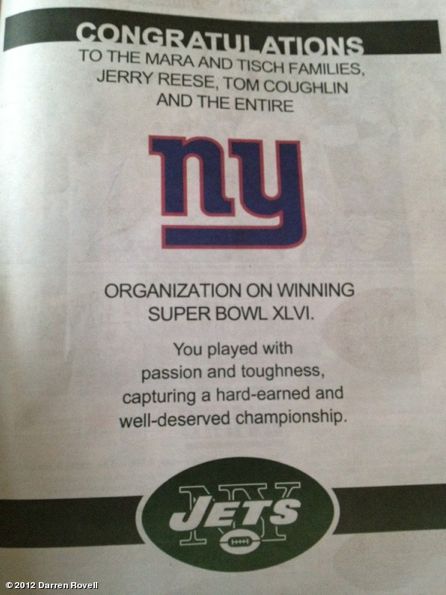 Here is a funny moment from the New York Giants Super Bowl parade. A reporter asks an attractive woman which player she wants to see and she shouts…”Sanchez!” Yeah, pretty sure she was just there for the party. As a Jets fan though I wish he was in the parade because that would have meant a Super Bowl championship! Wishful thinking.