Excitement, suspense, intensity–you name it. Expect all that and a lot more as the Stanley Cup Final gets under way between the New York Rangers and the Los Angeles Kings. Even if you’re not a hockey fan if you tune in you’ll get hooked as this Stanley Cup Final trailer gets you ready.

As we get closer and closer to the start of the World Cup, the ESPN PR machine is in full promotion mode. Try to watch the Worldwide Leader for 30 minutes without seeing some sort of soccer story. Of course this is because ESPN has the rights.

Meanwhile the NHL Stanley Cup Finals are under way but good luck seeing any extended coverage of what some believe is the most exciting postseason in sports. Of course ESPN does not own the rights to the NHL.

This leads to the ongoing media debate of the role and power of ESPN. Are they a sports news operation? A promotion machine? Is it both and how should the two be balanced and do they conflict?

In this day and age it all cross pollinates. For most sports media companies, whether it’s television or radio for that matter, there is an obligation of coverage to the sport or team the entity paid to gain their rights. ESPN dished out $100 million for the English-language rights to the 2010 and 2014 World Cup’s. That’s a large sum of cash so like any business ESPN wants to capitalize on their investment. That means features, stories and opinion woven throughout their sports “news” programs with the hopes that it will drive more people to watch the matches. ESPN I’m sure will also argue that there is a higher demand for the World Cup than the NHL.

Whether you agree with that assessment or not ESPN has the power to make that decision due the dominant position they own in the sports media landscape. They have been the pioneers of blurring the lines between sports journalism and promotion in pushing their “sports” agenda. And we as sports fans just have to accept that and clearly we have considering ESPN has yet to have a true viable competitor.

And for those of us that would rather see coverage of the Stanley Cup Finals over the World Cup on ESPN, you’ll be happy to know that Fox Sports spent around $425 million to get the English-speaking rights to the 2018 and 2022 tournaments. Maybe by then ESPN will have regained the rights of the NHL and the coverage tables will be turned.

Hat tip to Ben Criddle on twitter for the picture that pretty much sums up one of the many differences between the two sports.

This is a very funny video of a condor getting loose on the ice at a ECHL game between the Bakersfield Condors and the Las Vegas Wranglers. Many great moments to this video–the bird handler falling on his rear end, the reaction of the announcers, to the condor heading to the bench and then deciding to head down the tunnel and calling it a night.

Thunderbug, the Tampa Bay Lightening mascot, decided to spray silly string at a Boston Bruins fan. The fan didn’t like it and shoved the mascot. As the fan was being escorted away he began jawing at Thunderbug who continued to taunt him. Clearly the Boston fan overreacted but Thunderbug needs to be blamed as well. I might have punched that goofy bug myself if he got me thrown out. Obviously he knew the fan wasn’t happy considering the Bruins were losing to an awful Lightening team. And yes I just officially broke down a fight between a crazy fan and a bug mascot. Definitely a slow day in sports!

Even if you’re not a hockey fan the Winter Classic in which they play an outdoor NHL game is a great concept. This year it was in Philadelphia between the Flyers and the Rangers. After the game it wasn’t a shock that some fights would break out–particularly in Philly. The video above are Flyers fans brutally ganging up on two Rangers fans. What’s interesting is the Philadelphia police have put out the video below on YouTube to try to find the culprits. Here’s hoping their successful. (WARNING: Violence and strong language)

Leave it up to a Canadian band to glorify one of the country’s more embarrassing moments. The death metal band Nylithia produced a video for the song “Immersed In The Maniacal” utilizing footage from the Vancouver riots after the Stanley Cup Finals. The riot scenes are interspersed between loud screaming and hair whipping. Turn it up!

WARNING: Strong language (I think although hard to tell with the screaming!):

Always good to see rich former athletes get richer. This is former NHL great Joe Sakic drilling a hole-in-one for one million dollars. Actually $500,000 went to Sakic while the other 500k was given to charity. And he didn’t even get excited until he was told too. I’ve been playing golf all my life (albeit poorly) and have never gotten a hole-in-one let alone one for cash. Can you tell I’m not bitter?! 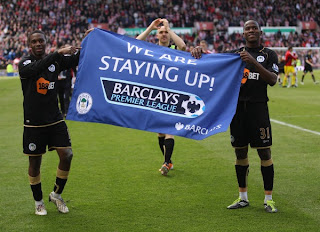 Monday we posted a story about the riots that took place in Argentina after one of their teams were “relegated” for the first time in its history. If you’re a soccer novice (or hater or don’t care, or both like myself) being “relegated” means a team is essentially demoted–forced to leave an upper league for a lower one. It would be like a Major League Baseball team being sent to Triple-A. It’s really one of the few ideas from soccer I actually like. So to continue with that theme here are some of my suggestions of those teams that should be “relegated” in the American sports world. Feel free to ridicule or recommend others.

-Oakland Raiders, Cincinnati Bengals, Cleveland Browns, Detroit Lions, Arizona Cardinals, Denver Donkeys (Broncos) and Miami Dolphins (the last two because I despise them) to college football. In turn USC and Ohio State will move up since their players are already being paid. Alabama, Auburn, Oregon, Oklahoma and LSU will be called up as well. Sorry TCU and Boise State–once again the non-BCS schools get the shaft.

-The Buffalo Bills will be sent to the CFL since they’re playing some games in Toronto already. No CFL team will be called up in its place since they play a cartoonish brand of football with only three downs on a ridiculously large field.

-In the MLB, Kansas City, the New York Mets and the Dodgers will go to Triple-A due to their mediocrity, ownership issues, lack of fan support and/or fan annoyance. However Florida, Houston and the Chicago Cubs are so bad they will be “relegated” to their respective local co-ed softball leagues.

-In the NBA, Cleveland, Toronto, Washington, New Jersey, Sacramento, Golden State, Detroit and Charlotte will be replaced by the Elite Eight of the previous year’s NCAA Tournament. That means Kentucky, North Carolina, Arizona, UCONN, Kansas, VCU, Butler and Florida get NBA invites this upcoming season. The LA Clippers and Minnesota Timberwolves would be “relegated” to the Harlem Globetrotters to be used as back-ups to the Washington Generals.

-In the NHL, outside of the four U.S. “Original Six” franchises–Boston, Detroit, Chicago and the New York Rangers, the rest of the teams will be “relegated” to Canada since they actually care about the sport there.

-And finally after another embarrassing loss to a third world country (Mexico) the USA Soccer team will be relegated to–oblivion.

If you agree, disagree or have other suggestions feel free to provide your comments below.

Nathan Kotylak, a 17-year-old Canadian water polo star, gave a teary eyed apology for his role in the riots after the Vancouver Canucks were beaten in Game 7 of the Stanley Cup Finals last Wednesday. Following the mayhem, a picture of Kotylak surfaced showing him lighting a cop car on fire. He has since been suspended from the team and will face charges in court. I am sure many of us did stupid things at that age, but I have to think none of us were dumb enough to torch a police car. These crazy, wacky kids these days!