Mark Ingram cried on camera at the 2011 NFL Draft. Reggie Bush did so via Twitter.

Once the New Orleans Saints traded up Thursday to select the 2009 Heisman Trophy winning running back from Alabama with the 28th pick, Ingram cried when ESPN’s Suzy Kolber read him an email from his imprisoned father. His dad, also named Mark Ingram, played 19 years in the NFL and was drafted in 1987 by the New York Giants ironically enough also with the No. 28 pick. He was sentenced to seven years in prison in 2008 on charges of bank fraud and money laundering.

It was a touching moment for a talented kid who should be a nice fit in New Orleans. I just hope he doesn’t follow in the footsteps of other Saints first round drafted running back busts–Ricky Williams and Reggie Bush.

Speaking of Bush, he cried via his Twitter account after Ingram was drafted tweeting, “It’s been fun New Orleans.” No Reggie, it really wasn’t. 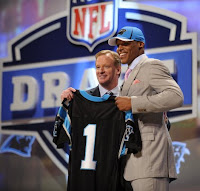 For the first time in 12 years three quarterbacks were taken in the Top 10 of the NFL Draft. And the sad thing is Cam Newton, Jake Locker and Blaine Gabbert all have a better chance of being busts than All-Pros (and I’m not counting the fourth most likely bust in Christian Ponder because he was taken 12th by the Vikings).

Lets first turn back the clock to 1999. Tim Couch was taken with the first overall pick by the Browns immediately followed by Donovan McNabb and Akili Smith. So only one of out three turned out to be productive. Since that year and not including Thursday, 18 quarterbacks have been selected in the Top 10. Ten of those went on to have productive careers. Eight have been absolute flops. That’s just a 55.6 percent success rate.

My guess is that the percentage will go down when we look back onto the careers of the newest additions to the Top 10 QB club. Newton is an athletic freak but appears to have the mind, temperament and work ethic of a 10-year old. Jake Locker can run (just like the Titans previous QB Vince Young) but can’t throw. Kind of an important attribute you need in a quarterback don’t you think? And there is a reason Blaine Gabbert was passed on for Locker and was going to continue to slide before the Jaguars saved him. He’s a project.

The fact so many quarterbacks went as high as they did tells me the overall talent level in the draft was poor. After the Top 5 picks, teams started reaching for need because there wasn’t many game changing sure-fire stars to take. So while the first round was intriguing it will be interesting to see how many of these players pan out.

But here’s my advice to dad’s out there–after seeing this batch of questionable QB’s go as early as they did, start training your son’s to throw as soon as they emerge from the womb. Seems like it will turn out to be a pretty good investment.

Here is a rundown of the QB’s drafted in the Top 10 in the last 11 years and how I classified them. Let me know if you think differently:

NFL commissioner Roger Goodell was booed as he took the podium for the first time for Thursday night’s 2011 NFL Draft. I give it up to the crowd who also started chanting “We want football!” Goodell seemed surprised by the negative reception. To that I would tell him to get out of his plush office more and live in reality.

Literally God’s Gift to basketball has committed to play the next two years at St. Johns. God’s Gift Achiuwa is a 6 foot-8 power forward from Erie Community College in New York and averaged 22.3 points and 13.1 rebounds last season earning him first team juco All-American honors. He hails from Nigeria and his father is a minister. Boy nothing says pressure like naming your son God’s Gift! Surprisingly enough Notre Dame or BYU were not in the mix as he chose the Red Storm over Washington and Cincinnati. This is the only video I could find of God’s. Just consider it my Gift to you, my children…

Everyone is talking about the lack of excitement and passion for the 2011 NFL Draft.  Most think it’s due to the labor struggles between the players and owners and the questions regarding whether there will be a season or not.  Others because of some rules that handcuff teams from making trades.  And then there are some that believe it’s because of the overall lack of talent available in this draft.  They’re all wrong.  It’s because the New York Jets are good.

Lets face it.  Some of the best NFL Draft drama over the years was when the commissioner would say, “The New York Jets are on the clock.”  It usually happened within the first five picks.  The New York crowd would erupt. The ESPN crew would make their recommendations. Fans would heckle their suggestions.  Then the commissioner would head to the podium and announce, “With the (fill in blank) pick in this years NFL Draft, the New York Jets select (dramatic pause)…A terrible player that doesn’t deserve to be drafted this high and will turn out to be a bust!”  The crazy Jets fans in the crowd would scream in horror shouting profanities!  Mel Kiper’s hair would ignite in flames and every other NFL fan and viewer would bust out in laughter.  It was must see TV–the perfect drama and comedy wrapped into one.

Well those days are long over. I guess we can thank Rex Ryan and a newly intelligent Jets operation for that.  Let’s face it, when your picking 30th it just isn’t the same.  The fans can’t get as a crazy.  In fact I’m not so sure they can stay sober enough to avoid passing out by the time of that pick.  I will admit though, as a lifelong Jets fan there is a part of me that misses those angrier times.  The NFL Draft was our version of the “Super Bowl.”  But with that said I’ll gladly give that up if we can attain the real thing.  But all I know is…THEY BETTER DRAFT A PASS RUSHING DEFENSIVE END OR I SWEAR I WILL…

Atlanta Braves pitching coach Roger McDowell allegedly made homophobic comments, crude sexual gestures and threatened to knock out the teeth of a fan with a baseball bat over the weekend before a game in San Francisco.  While the coach was apologizing yesterday, glory seeking lawyer Gloria Allred who was hired by the fan offended Justin Quinn, decided to simulate what McDowell did with the bat. Of course they did this in front of Quinn’s nine year old twin girls. Nice parenting skills Dad! Lets just say the whole demonstration was just a bit creepy. (WARNING: Video Could be offensive to some)

Oklahoma City appears to be the best team with the best player at the moment in the Western Conference. Kevin Durant went off for 41 points in the Thunder’s 100-97 victory over the Denver Nuggets to win the series 4-1. Durant showed why he is a great one in the making taking over the game when it mattered most scoring the final nine points. If Russell Westbrook would learn his role, which is not to shoot so much, this team is the favorite to reach the NBA Finals. Imagine how good they’ll be when they actually hit their prime? Only of course if they can keep the team together.

The San Antonio Spurs seemed to be dead. In fact on my personal twitter after Manu Ginobili’s three-pointer that apparently tied the game was ruled a two I tweeted, “Heck of a shot by Ginobili. Too bad his foot was on the line. That should do it for Spurs. What a waste of a good regular season.” Not quite due to Gary Neal’s clutch three to send it into overtime leading to the eventual 110-103 win. I think I’ll just re-tweet my original thought once the Spurs lose Game 6 in Memphis. If your a Grizzly fan you better hope they win at home. I can’t imagine they’ll take a Game 7 against an experienced Spurs team in San Antonio.

This is the Neal shot from NBA TV’s broadcast. Hear the excitement from the announcers? Not quite. That’s because the NBA used the Grizzly broadcast team. Memo to NBA: spend a few extra grand and get us some national broadcast guys that will show emotion for both teams.

Here are some chilling videos of the tornado that ripped through Tuscaloosa, Alabama yesterday that at last check left nearly 200 people dead and several more injured. The first video is the shot of the tornado that just missed the University of Alabama’s football stadium. The second is a shot a reporter took from his car. Our prayers and thoughts are with everyone there.

I’m not a fan of soccer. In fact I don’t like many of the fans who are. You know, the soccer snobs that dress up in scarves when it’s 100 degrees out and try to act European demeaning us “simpletons” that supposedly don’t get their “beautiful game”. So as you can tell I have spent a good chunk of my life ridiculing it. However, I have found myself watching the World Cup when our national team plays. I realized I can stomach the game when played at the highest level. I also realized that we stink regularly losing to third world countries.

With all that said there is a chance tonight where we as a country can get some respect at the game we didn’t invent. I am rooting for Real Salt Lake because they are representing the United States of America. A win or a tie (after last week’s 2-2 tie, a draw tonight by a 0-0 or 1-1 score nets the win hence they can win by not really winning!) propels them into a place no American soccer team has gone, the FIFA Club World Cup. It would be the first MLS, American, team to do so. We are clearly the underdog but that’s when we as a country are at our best. Remember the Revolutionary War!? It’s our time RSL, win (or tie only by a 0-0 or 1-1 score though!) and let us as a country feel good about our soccer selves for once. Who’s with me?!? Thank you and God Bless America.